The Conservation Section of the University’s Master Plan outlines the goals, objectives, and policies that demonstrate the commitment to the protection of the University’s environmentally significant lands. Management techniques used on campus natural lands include prescribed fire, invasive species management, restoration, and species conservation & management. Research, particularly focused on wildland-urban interface management, is actively conducted in all management units, which is used to continuously develop better land management techniques. Click on the pictures below to explore this section further. 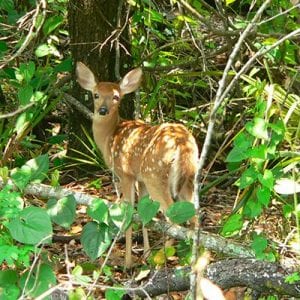 Vegetation monitoring is the collecting of plant occurrence data in order to determine habitat health and to record changes in the plant community at specific monitoring locations in the undeveloped portions of campus. Vegetation monitoring serves as a mechanism for obtaining data that help us to determine community type and changes to that community type over time. Forty-six (46) different monitoring plots are visited biannually, once in the summer growing season and once in the dormant winter season. Plant composition is recorded at each plot. This process provides valuable information that is crucial to the Natural Resources Team’s effective management of the land. It is their duty to promote biodiversity and ecosystem health for the different communities harbored on campus. The community types are defined by the Florida Natural Areas Inventory (FNAI).

There are 3 different conservation land classifications that define the >800 acres of natural lands on UCF’s main campus.

UCF’s main campus is home to 319 acres of conservation easements that are protected under conditions set forth by the Saint John’s River Water Management District (SJRWMD). A conservation easement with the SJRWMD is a perpetual agreement between the land owner and the water management district to manage the land in its pristine state and to be kept safe from development in order to conserve Florida’s “open space, water recharge areas, environmentally sensitive lands, wildlife habitat, or historic features on a specific parcel of land.” These conservation easements are often a mitigation agreement to off-set environmental impacts that occur during land development. As UCF develops natural areas, more acreage is put aside as conservation.

The goal of The University of Central Florida’s Restoration Plan is to conserve, appropriately use, and protect native vegetative communities and wildlife habitats. Through the Land Management Program, the University continues to coordinate with state and regional environmental agencies, such as Saint John’s Water Management District (SJRWMD), Florida Fish and Wildlife Conservation Commission (FWC), and the Florida Forest Service (FFS) to appropriately manage all of the campus natural lands and specifically designated conservation areas. To achieve this goal, the Land Management Program uses several techniques, such as prescribed burns and mechanical treatments, to reduce overgrown shrubby species and promote a healthy herbaceous understory in the natural lands on campus.

Activities in Restoration on Campus

Sandhill habitats require frequent disturbances, roughly every 1-3 years, to maintain natural species assemblages. The ideal, natural disturbance is fire but mechanical disturbances such as mowing or roller chopping can be used intermittently. The UCF sandhill parcel on the southwest edge of campus was previously mowed from 2008 to 2019, which prevented native woody species from shading out the naturally abundant groundcover species and provided a head start to restoration work. Since mowing has ceased, a new disturbance regime will need to be implemented if a healthy sandhill ecosystem is the goal for this property.
The restoration plan outlines removal of exotic species, planting and seeding of native species, and a 1-3 year disturbance regime. An experimental design is outlined to evaluate whether prescribed burns, mechanical mowing, or a combination of the two is an appropriate disturbance regime for sandhill habitat in an urban environment. The results will allow land managers with similar sites to plan accordingly for long-term maintenance and monitoring. Restoration activities began when mowing ceased in 2019, and t he project will be in process until 2028. Additionally, the restoration plan incorporates recreational opportunities for UCF students and the surrounding community through a potential installation of stationary workout equipment and a 1-mile running trail around the site. 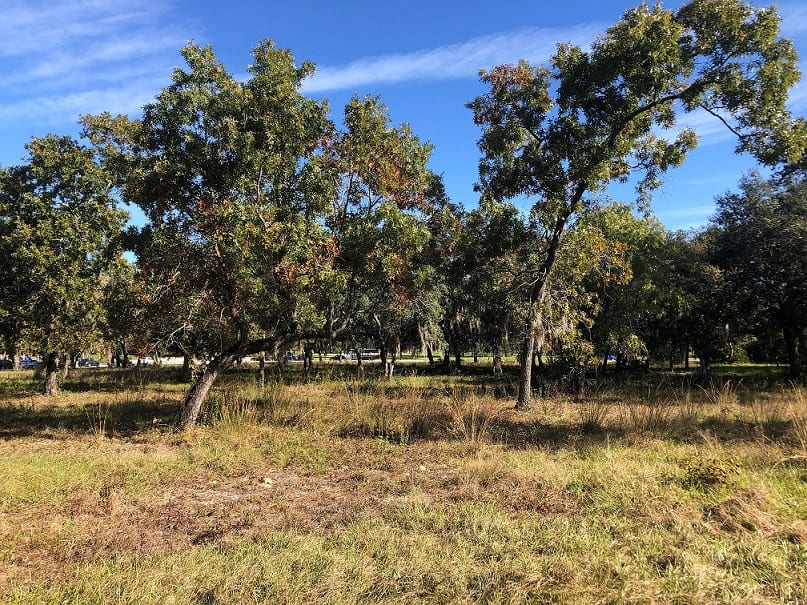 Along the north east edge of the UCF property exists a riparian area that has previously been damaged by ATV use. A riparian area can be described as the land that either directly influences or is directly influenced by a watercourse. In our case, the Little Econlockahatchee River is directly influenced by UCF’s riparian area. Since this type of ecosystem frequently experiences a flow of water, plant species that inhabit the area are crucial to land stabilization. Without the plants holding the soil in place, ruts and gullies are created and sediments are washed into the affected water body causing increased turbidity and sediment buildup which can be harmful to aquatic species. The Natural Resources team has been working to enhance and restore this ecosystem through the addition of erosion control matting made out of biodegradable materials and by planting species of aquatic and upland plants in appropriate areas to more permanently stabilize the soil (see planting list). Access to the damaged areas has been blocked off to prevent foot traffic or further use by ATVs, insuring that the restoration will be a success. 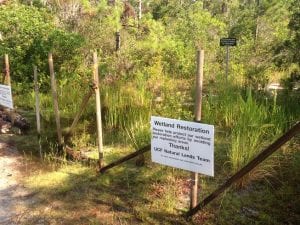 Bringing Back the Florida Desert

UCF’s Department of Landscape & Natural Resources (LNR) team, with the help of twenty-five volunteers, began efforts to restore two sections of Scrub habitat in the natural areas along North Orion Boulevard, across from Brighthouse Stadium. Florida scrub is a unique habitat that supports several rare plant and animal species including the Threatened Gopher Tortoise (Gopherus polyphemus) and a scrub endemic, Garberia (Garberia heterophylla). Scrub is sometimes referred to as Florida’s desert by biologists due to the well-drained sands and open space of low growing woody plant species that have adaptations to conserve water.

Several years ago, two circular areas were cut into the natural lands as part of a landscape theme and was never completed. This restoration project will begin to recapture those areas back to Florida Scrub to provide foraging habitat for the Gopher Tortoise and other scrub dependent species.